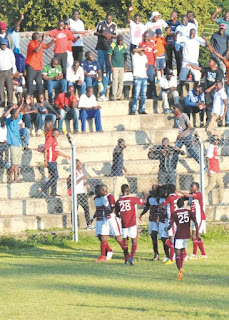 ZVISHAVANE - There was drama at Maglass Stadium on Sunday after journalists were forced to pay to cover the match between Shabanie FC and Ngezi Platinum Stars FC.
Mukudzei Chingwere of The Herald, Terry Madyauta of NewsDay and many other journalists were not allowed to get into the stadium on account of failing to produce Premier Soccer League (PSL) accreditation cards.
PSL has however came under fire for failing to process the accreditations for sports journalists who applied as far back as February.
Present during the match was PSL official Rodwell Thabe who, despite being well aware with the challenges at his organisation, surprised many people when he ruled that all those without the accreditation must pay entry fees.
Thabe later got involved in a serious altercation with Ngezi Platinum Stars team photographer Calvin Mavhunga who was video recording the match.
This was after he dictated that only those awarded the tender to broadcast the PSL matches could video-record the match.
Mavhunga tried, in vain, to explain that he was recording for the team and not for broadcasting, leading to the flaring of tempers and later to the intervention of Bvaru Bvaru public relations officer Weston Wesley who managed to make peace.
Wesley himself expressed disappointment at the accreditation debacle, saying people had probably ignored the list of journalists he had prepared for them to allow into the stadium to cover the match.
Regardless of these hiccups, the match itself was entertaining, with Bvaru Bvaru giving Madamburo a good run for their money.
The visitors drew first blood in the 37th minute through a Terrence Dzukamanja header but the hosts came back from the breather a determined side and managed to dominate the whole of the second half.
For their efforts, the hosts were rewarded in the 91st minute after David Temwanjira headed home an Ally Maliselo corner kick to equalise.sport