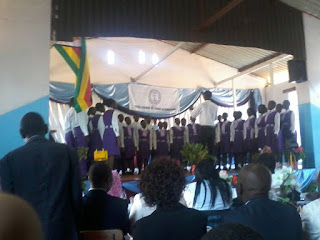 CHIPINGE - The revived United Church of Christ in Zimbabwe (UCCZ) school choir competitions recently held at Chikore High Schools have been described as critical in the promotion of worship music culture among school children.

Participants in the competitions included such schools as Mount Selinda, Chikore, Emerald, Middlerands, Chinaa and Watershed as well as others under the UCCZ banner.

Danster Mundeta of Chikore Mission praised the competitions, saying they amounted to the revival the old worship choir culture long lost back in the 1980s or perhaps in the 1960s.

"We are pleased that people have come to realise the importance of bringing this culture back, all in the name of advancing the word of the Lord among our children," said Mundeta.

The event was graced by UCCZ president Freeman Ngadziore and other senior UCCZ members, pastors, school heads and their deputies, teachers, former pupils and members of the UCCZ education council among many others.

Chikore High choir master, Taurai Mukutyu said he was content with the second prize as it came at a price of hard work against strong competitors.

"We worked very hard. Our competitors were very good so we are pleased with our current achievement although the ultimate objective is to keep on improving," said Mukutyu.

Chikore High School head, Stella Mudiwa said she was pleased by the performance of her team in particular and the organisation of the competitions in general.

"It is humbling that we were hosts of such a grand event and everything went well. We congratulate the winners and encourage all others to keep on working hard," said Mudiwa.

She thanked Mlambo for committing his time and resources to sponsor the competitions that she said played a part in promoting the culture of Ndau people as the hymns were sung in their language.