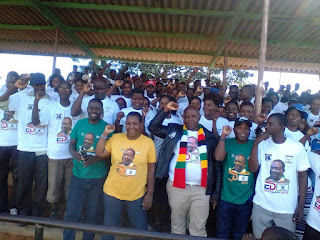 Togarepi (in scarf) does a slogan during the event

Beatific Gumbwanda
CHIREDZI - Zanu PF national youth chairperson, Pupurai Tigarepi was this week left embarrassed after less than 200 youths attended the #EDHasMyVote launch at Tshovani Stadium.
The disappointed Togarepi blamed provincial youth member, Philip Chieza for failing to mobilise young people to boost attendance at the event.
"I was expecting a large crowd, like what we used to do back then," said Togarepi who later packed up much of the party regalia he had come to distribute as there were far less people than expected.
TellZim News later contacted Chieza who said the low youth turnout was inevitable because he had received the message about the rally at a short notice.
"The message came on Sunday at a short notice so it was impossible to sufficiently prepare and have a bumper crown on Tuesday. Most youths were occupied but I am glad a number of them attended the function and regalia was distributed," said Chieza.
During the meeting Togarepi urged young people to take land from sugar producer Tongaat Hulett and empower themselves economically.
"Youths must get cane land from Tongaat Hulett in order to sustain themselves," said Togarepi without elaborating on whether or not he meant illegally seizing the land as has happened in the past.politics