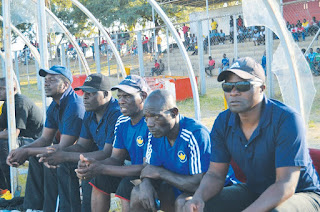 A hard-fought Eastern Region Division One day one encounter at Mucheke Stadium last Sunday saw Manicaland-based new boys, Manica Diamonds FC, holding Masvingo Pirates to a one-all stalemate.
The diamond miners were getting their first taste of division one football under the guidance of veteran mentor Luke 'Vahombe' Masomere.
Hosts Masvingo Pirates dominated the better part of the first half although chances came both ways without conversion.
It was, however, the visitors who took the lead in the 51st minute thanks to a hard-fought Benjamin Marere solo goal which piled pressure on the hosts.
On the stroke of the 65th minute, Dzinochekwa Baba, as Masvingo Pirates are affectionately known, levelled matters through a Shelton Timba emphatic strike assisted by Washington Ncube.
Manica Diamonds could have restored their lead had they not been consistently let down by poor finishing in the front.
Manica Diamonds Head coach Luke Masomere was content with the draw, saying it heralded greater things to come throughout the season.
"We played a very good game. This was our first game at this stage as Manica Diamonds but we are not new in football. If we manage to build upon that fairly good start, then we are destined for greatness," said Masomere.
In other matches, Masvingo United drew one-all in an away match against Mwenezana while Gutu FC thrashed Bikita Minerals FC 3-1 at Paradise Stadium.sport
Share !