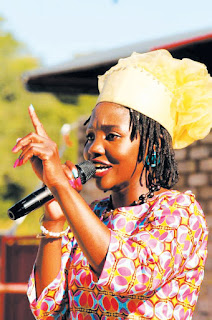 Attalia Parehwa performing at the launch of her 4th album

ZVISHAVANE - Gospel musician Attalia Nsingo Parehwa launched her new album at YA FM Radio Park on April 07 during an occasion that confirmed the young singer as one of the most promising female gospel artists in the country.
Titled Ndakasarudza, the album, which comprises 12 tracks, was launched in the presence of many people including aspiring Zvishavane-Ngezi Member of Parliament (MP) Lewis Matutu who chipped in with US$500.
Others who graced the occasion are artists Praise Govera, Gamuchirai Magadzire, Sandra Chirenje and YA FM presenter Admire Nago.
Reading a prepared speech on behalf of the minister of Youth, Sport, Arts and Recreation Kazembe Kazembe who was supposed to be the guest of honour, Midlands Provincial Arts Culture and Heritage Officer, Reward Shockson committed government support for the gospel industry.
"While in most cases a prophet is without honour among his own people, it is different for Attalia who has a legion of fans in Zvishavane and is also growing a fan base around the country," he said.
He said the arts were an important vehicle of communication that cut across the racial, social, cultural and economic divide.
The minister also urged members of the public to support the growth of the music industry by buying legitimately released music and by shunning piracy.
The minister bought the new album for US$500, Govera bought it for $550, and Zvishavane business woman Melody Tsiga – popularly known as Mai Isheanopa – bought the disc for US$200 while Admire Nago bought it for US$120.entertainment