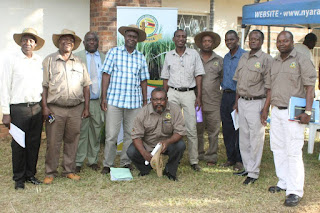 …association registers new company in quest for growth
TellZim Reporter
Hippo Valley Productive Sugarcane Farmers Association (HVPSFA), the fastest growing farmer association in Chiredzi, recently celebrated its fifth anniversary with a strong emphasis being put on the need to maintain the highest standards of transparency, integrity, honesty and productivity.
Members of the association acknowledged those values as necessary for the achievement of diversification of their farming ventures.
In his remarks, HVPSFA chairperson, Marius Dzinoreva urged members to work hard for the success of the association in their respective capacities, and also called for continual leadership renewal.
"Let us lead together in order to avoid life leadership. We need a servant type of leadership not lifetime leadership," said Dzinoreva.
Recently, the organisation bagged awards from the Zimbabwe Sugarcane Association Experiment Station (ZSAES) and from the Lowveld Community Development.
At the inaugural Lowveld Community Development Awards in July last year, Dzinoreva was nominated the overall best sugarcane farmer in Hippo Valley, with the trophy going to another esteemed farmer, Rtd Major Faster Gono.
"Cde Gono's hard work was recognised through the shield he won for the overall best sugarcane farmer in Hippo Valley Area for 2017 at the Lowveld Community Development Trust Awards. Cdes Matanga, Kanda and Jambaya and I were awarded certificates in the Hippo Valley farming area," said Dzinoreva.
Another member of the association, Willington Chinoda, was nominated best farmer in Hippo Valley Area by ZSAES last year.
HPVSFA has a permanent office and has registered a company, Productive Sugarcane Farmers of Zimbabwe (Pvt) Ltd) to act as the grouping's vehicle for such work as the importation of inputs.
"We have received the necessary documents to complete the change of ownership of the association's office and are currently awaiting the Zimra Capital Gains Tax clearance certificate for finalisation of the conveyance of the office.
"The association has registered a company for the purpose of importation of inputs and other items beneficial to the association. We have also done that as part of our preparatory work in case the need arises for our farmers to directly sell their own sugar," said Dzinoreva.
HVPSFA was formed in October 2013, with the major objective of bringing farmers together for the transformation their farming businesses.
The organisation started with 50 farmers but it now has eight more fully paid up members who joined in acknowledgment of the importance of the association's developmental agenda.
HVPSFA boasts of a reliable human resource in the form of its chairperson, Dzinoreva, who is director in the Ministry of Lands, Agriculture and Rural Resettlement.
It also has a 12-member committee which has three area chairpersons for Hippo Valley West, East and Central.
The committee's daily tasks mainly revolve around initiating close interaction among members for the purposes of strengthening mutual understanding.
Since coming together, members of HVPSFA have registered a notable increase in yields, with each farmer now able to produce, on average, 120 tons of sugarcane per hectare.
During the fifth Anniversary celebrations, Dzinoreva revealed that productivity had remarkably increased in 2016, with the association delivering 21 434 bundles of sugarcane which rose to 27 363 in 2017.
Tonnage increased by over two percent from 107 222.59 tons delivered in 2016 to 109 533.78 delivered during the 2017 farming season.
Earlier in 2017, 123 army officers from China, Tanzania, Nigeria and the SADC region who were at the Zimbabwe Staff College visited Rtd Major Gono's farm to draw lessons.
In August 2017, government appointed Dzinoreva as board member of the Forestry Commission after he was identified as knowledgeable in the complex forestry matters.business