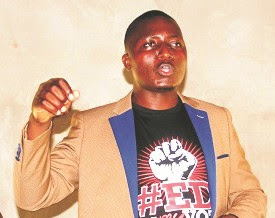 ZVISHAVANE – Zanu PF deputy secretary for Youth Affairs, Lewis Matutu has declared his interest for the Zvishavane Ngezi parliamentary seat sending the incumbent legislator John Holder and other aspiring candidates into panic mode.
Matutu who is a darling to the constituency stole the lime light at the independence celebrations held at Zvegona Primary School where people began chanting his name and holding placards endorsing him for the seat.
The youthful Matutu's campaign manager Maxwell Moyo told TellZim News that the electorate have chosen their candidate and the primaries will be a formality to endorse what is now obvious.
"We have done so much and the people have shown overwhelming support. Matutu has drilled boreholes and donated cement towards the construction of school blocks in various schools," said Moyo
In the primaries on May 5, Matutu is likely to battle it out with Holder and another candidate Dumezweni Mahwite.politics
Share !