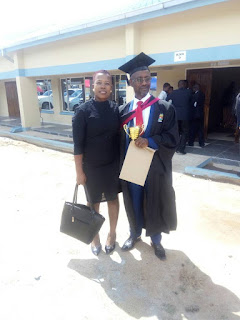 Moses Ziyambi
City of Masvingo mayor, Cllr Hubert Fidze was among the thousands of people who graduated from the Reformed Church University (RCU) over the weekend, adding to the relatively large pool of degreed personnel at council.
Fidze graduated with an upper second class Bachelors of Commerce Honours in Public Administration, emerging as the best student in Research and Development.
He bagged a total of 22 distinctions out of the 36 modules that form the four-year-long degree programme.
Fidze becomes the first mayor and politician to graduate from the RCU which recently relocated to its new campus some seven kilometres along the Masvingo - Bulawayo highway.
He joins fellow councillors Garcia Mundondo (Ward 1), Lovemore Mufamba (Ward 10), deputy city engineer; Edward Mukaratirwa and deputy treasurer; Danster Jori who all graduated from Great Zimbabwe University (GZU) in October last year.
Mundondo attained an upper second class honours degree in Peace, Conflict and Governance while Mufamba, who did his work related learning (attachment) with Tell Zimbabwe in 2015, also obtained an upper second class Bachelor of Arts Honours in Media and Cultural Studies.

Mukaratirwa graduated with a Master's Degree in Business Administration and Finance while Jori graduated with a Master's Degree in Applied Accounting.
Speaking to TellZim News this week, an ecstatic Fidze said he was happy to be able to complete his studies under difficult conditions.
"I thank the Lord for this feat. It wouldn't have been possible without his amazing grace. I also thank my wife and the whole family for standing by me. I didn't have enough money and I didn't have enough time, but here I am. This qualification will help me to be a better public servant," said Fidze.
He also revealed that he was looking at opportunities to further his studies towards a master's degree in the near future.education