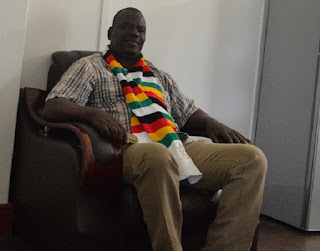 Upenyu Chaota
Masvingo Urban constituency, which was orphaned after Daniel Shumba was fired from the ruling Zanu PF party and recalled from parliament, has seen other big names being thrown into the ring.
Among such weighty names is none other than that of prominent businessman and war veteran Taguma Benjamin Mazarire.
Having successfully submitted his CV to the party's provincial electoral directorate (PED) last week, Mazarire, who once contested in Masvingo West in 2013 but gracefully lost in the primaries to Ezra Chadzamira – who is now provincial chair – has now shifted his focus to the urban seat.
Zanu PF is set to hold primary elections on May 05, and Mazarire is likely to battle it out with two other business giants, Edison Zvobgo Jnr and Godhati Dunira.
Mazarire said he had set his sights on the urban seat owing to overwhelming calls by the public for him to represent them in the House of Assembly.
"There are times when people ask you to do something for them and you tend to ignore the calls but when the calls grow louder, you are obliged to act.
"Even if someone you do not want to talk to starts calling on your mobile, you may ignore the calls for some time but if they persist, you would either switch the phone off altogether or you answer. I decided to answer the calls from the people in Masvingo Urban; the people I love very much," said Mazarire.
The astute businessman, who runs a vibrant money-lending company Hilthru Enterprises which is headquartered in Masvingo, said he understood the problems affecting the people in the urban constituency which is his own permanent home.
"The people of Masvingo should vote for someone who identifies with their daily problems. In 2013, we voted for a missing person who abandoned us for the luxuries of Harare and failed to represent us.
"It should be different this time around. I expect people to vote for someone who can take their problems to parliament and come up with policies that can transform lives," said Mazarire.
Mazarire said once the CVs are processed at national level and the final list announced, he will launch his campaign which is themed 'For the Masvingo we want'.politics