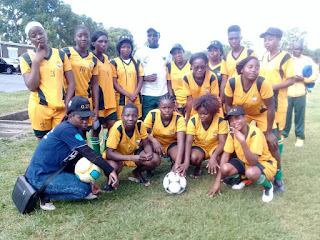 It was, however, MSU that proved to be the big sisters of the game after they were crowned champions following a 8-0 rout against UZ in the grand finale.

GZU won bronze after finishing at number three, beating a host of other strong competitors from across the whole country.

Over ten private and state universities competed in such disciplines as athletics, football, handball and basketball.

Despite coming into the tournament as underdogs the GZU girls' soccer team shocked some of the tournament's favourites with a stellar performance. MSU, on the other hand, had come in as strong favourites, being the defending champions.

In their first encounter, GZU thrashed WUA 8-0 before losing 5-0 to MSU. They also settled for a goalless draw against Cut but won 2-0 when they played their last match against AU.

GZU proceeded to the semis as best runners up in Group A but fell 4-0 against the hosts.

They then played the third and fourth playoffs versus other semifinal losers, National University of Science and Technology (Nust), beating them 1-0 to claim the bronze medal.

"We competed well though most of the players were new on this big stage. I am proud of their endurance and they have helped to raise the GZU flag higher," said GZU head coach Ishmael Mahachi.