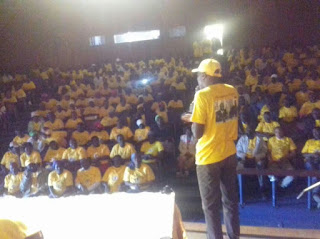 Clever Taperamoyo
MASVINGO - The Ambrose Mutinhiri-led National Patriotic Front (NPF) today Friday, May 27, made a bold proclamation of its presence in the province; holding its first provincial inter-district meeting at Charles Austin's Theatre.
The meeting – which drew approximately 300 people – was attended, among other people, by the party's chairpersons of wards and districts as well as provincial leaders.
NPF national political commissar, former Zanu PF Bikita South MP Jeppy Jaboon praised deposed president Robert Mugabe for bringing democracy and constitutionalism to Zimbabwe which he said the new party was eager to uphold.
He encouraged party members to respect the legacy of the former president as well as to shun fighting against other opposition political parties that he said were critical in removing Zanu PF from power.
"Do not fight with other opposition parties. We have the same mandate with them of removing Junta PF – the government of thieves. Whether it's MDC or any other opposition, we are rallying towards the same goal that the Junta must fall come August.
"We used to talk tiri muG40 kuti vanhu ava imbavha vane mweya wekuba plus that they are tribalistic. Nyika haitongwe nokuti unoti ndiri muKaranga but by the will of the people," thundered Jaboon.
Junta PF is the derogatory name coined by the now scattered members of the defeated G40 to smear the President Emmerson Mnangagwa-led Zanu PF faction that came to power at the back of a military coup last year.
Jaboon also hinted on NPF joining a mooted grand alliance of other opposition parties to confront Zanu PF as a united front.
"We will come back to you as leaders at a later stage if there are issues related to joining the alliance but we need to assess the ground first," he said.
NPF Masvingo provincial chairperson, Amasa Nhenjana said as a province, they will field aspiring councillors in all districts to contest in the forthcoming elections.
Other notable NPF members who attended the meeting were secretary for finance Phiona Rickets, national spokesperson Jealosy Mawarire and deputy national political commissar Visani Moyo.politics