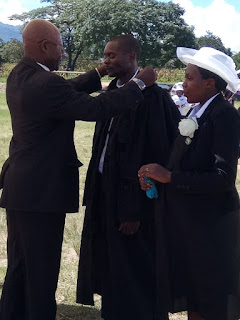 RCZ deputy general secretary, Wilbert Runyowa, dresses Pastor Julius Mhakure with the priesthood gown while Blessing Mhakure, the pastor's wife, looks on
Lloyd Shunje
MUTARE - The Reformed Church in Zimbabwe (RCZ) last week ordained Julius Mhakure as the new pastor for the Mutare congregation to replace Pastor Witness Hapazari who was moved to the Murambwi congregation in Masvingo over a year ago.
The event was witnessed by hundreds of people including Minister of State for Manicaland Provincial Affairs, Monica Mutsvangwa who pledged to work with churches for the development of communities in the province.
"I am very happy to be part of this historic event. On behalf of the government, our offices are open to churches so that we work together in the development of communities in our province and I applaud churches for maintaining peace and unity in societies," said Mutsvangwa.
RCZ moderator, Dr Rangarirai Rutoro applauded the role played by government in the growth of the RCZ.
"We want to thank the continuous support from the government towards the growth of our church. Yesterday, Minister Josiah Hungwe graced our 3rd Reformed Church University (RCU) graduation ceremony in Masvingo and today we have Minister Mutsvangwa here in Manicaland.
"We hope this does not end with our church alone but also with others so that we spread the gospel of God," said Rutoro.
Speaking after the ceremony, Mhakure said he was called by God to the Mutare congregation to teach and preach about the Kingdom of God.
"I thank the Lord for this day, for he has put upon our hearts the zeal to teach and preach the Kingdom of God. Our desire is to see the manifestation of the Kingdom of God in power, miracles, signs and wonders," said Mhakure.
A former teacher at Copota Primary School, Mhakure joined the RCZ Theological College in 2013 after serving in the Ministry of Education for six years.local