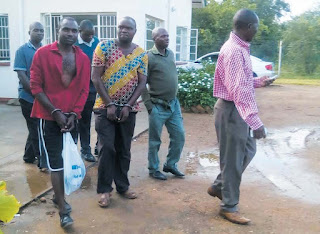 MWENEZI - Three suspected serial thieves from Rutenga growth point were last week arrested after a long reign of terror which had wearied the community.
Philip Ziga (36), Takunda Chimbo (23) and Bernard Mlambo (28) were not formally charged of unlawful entry when they appeared before magistrate Honest Musiiwa but they were remanded in custody pending trial on April 30.
The State is expected to allege that from January to April this year, the three connived and unlawfully entered into 17 different premises and took away various property including flat screen televisions sets, other electrical gadgets, mattresses and cell phones.
Ziga and Chimbo, who are both self-employed builders, used to visit their victims' homesteads pretending to be looking for work but they would later on return during the night to steal.
One of the victims is said to be a pastor whom the suspects visited in the day for prayers, only to return in the night to steal.
Their crime orgy ended when they broke into a house while the victim was fast asleep and got away with valuable property.
Upon waking up to find his house burgled, he immediately alerted detectives who swiftly carried patrols and found Mlambo, who is a known vendor during the day, carrying some of the stolen goods on his way to the bus stop.
After being questioned, Mlambo spilt the beans leading to the arrest of the other suspects.  Some of the stolen properties were recovered at the accused's respective homesteads.crime
Share !