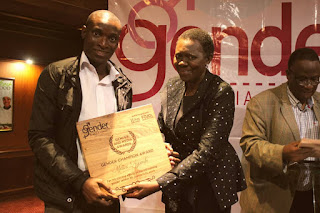 Ziyambi (left) receives his award
TellZim Reporter
HARARE - TellZim News, the leading publication for the southern region, has scooped the Gender Champion Award at the Gender Media Connect (GMC) awards held recently at the Rainbow Towers in the capital.
TellZim News news editor, Moses Ziyambi walked away with a shield and US$500 cash prize in recognition of his sterling efforts in mainstreaming gender within his journalistic work.
The awards were sponsored by GMC in partnership with Hivos and the Fojo Media Institute, an independent institution at the non-profit public Linnaeus University, Sweden.
There was stiff competition in the category, which saw the Zimbabwe Association of Community Radios (ZACRAS) being the runners-up.
A total of 71 entries was made, with 50 of them being from male journalists, while 21 were submitted by female journalists.
In a press release, GMC board member John Masuku said it is pleasing to see that male journalists and writers in the country have embraced the the concept of gender mainstreaming and a more gender-balanced work environment.
"We assessed stories on their originality, investigation, research effort and persistence. Depth of knowledge and the subject was also key in as far as it added clarity and influenced change in the community," Masuku said.
Other winners include Alois Vinga of Financial Gazette (News Reporting), Moses Mugugunyeki of The Standard (Specialised Reporting), Jeffrey Moyo a freelance journalist (Feature Story Writing) and Monalisa Dube of ZiFM (Radio).
Tafadzwa Ufumeli of NewsDay won the Photojournalism award, and in the Institutional category, Zimpapers scooped the top award.
Last year, TellZim News won two Traffic Safety Council of Zimbabwe (TSCZ) journalistic awards and also scooped a Youth Empowerment and Transformation Trust (YETT) award.top story