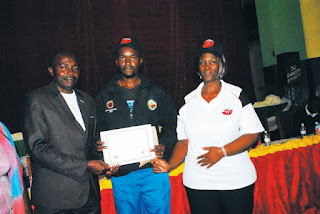 MASVINGO - The Traffic Safety Council of Zimbabwe (TSCZ) together with the Zimbabwe Insurance Brokers (ZIB) hosted the driver of the year awards for Masvingo City Council at Civic Centre as part of efforts to promote responsible driving behaviour.
The competition saw 11 out of the 15 drivers participating in the theory test and supervisor assessment, with only six drivers qualifying for the awards. It was, however, Macknight Mapeziweni who beat everybody else to claim the top spot with 91.5 percent.
Mapeziweni walked away with a certificate and US$150 in cash while Abious Charuma walked away with a certificate and US$100 after emerging at number two with 90.5 percent.
Givermore Magaa took the third position with 89.5 and was awarded a certificate and US$50 in cash while Daniel Tongofa was awarded a certificate only for scoring 86.5 percent,
Kemson Muneni and Kaipa Takasiyana scored 86 percent each, and both of them were given certificates.
Speaking at the event, ZIB representative Mercy Charamba said the insurance industry acknowledged the importance of good driving habits hence the support given to the programme.
TSCZ regional manager Georgina Mateta, who was the guest of honour, encouraged drivers to observe good driving behaviour to avoid accidents.
"Plus or minus 2000 people die per year due to accidents and 94 percent is caused by human error, five percent is caused by vehicle faults and only one percent is caused by the roads.
"As Zimbabwe Traffic Safety Council, we encourage all drivers to have a passion for the job they do in order to avoid road accidents that result from human error. Drivers must always have a good attitude when on the road," Mateta said.local
Share !