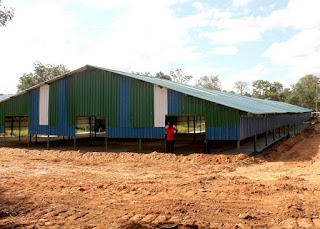 ZVISHAVANE - The Minister of State for Midlands Province, Owen Ncube is expected visit the town to commission a new flea market which has been under construction for the past several months.
The new flea market, constructed at a cost of US $200 000, is set to give some lucky vendors a dignified place sell their wares.
Town secretary, Tinoda Mukutu said the flea market will accommodate 400 informal traders and will contribute to the efforts being made to decongest the CBD.
"We have completed the construction of a new flea market along Buchwa Road that will house 400 traders. Our aim is to move as many vendors as possible from the pavements in order to decongest the CBD and ensure that Zvishavane is a clean town. The flea market will provide them with a clean environment to operate from and they will be expected to maintain those standards," said Mukutu.
He also said informal traders will be moving into the new place as soon as it is commissioned, which is likely to happen before the end of April. He said the commissioning was initially scheduled for the April 20 but was postponed to a later date.
Vendors in the mining town have expressed their gratitude to the council for constructing the flea market right where they are already conducting their business.
"We are very happy that council is not moving us to a new area which is further from our customers. The new flea market is just behind where we are right now so our customers will still find us," said one female vendor.local