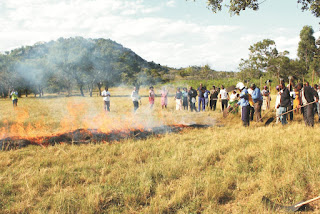 Mark Kutyauripo demostrates on how to use fire beaters

MASVINGO - Fire Fighters Trust (FFT) in conjunction with the Environmental Management Agency (Ema) recently trained chiefs and representatives of wards surrounding the Great Zimbabwe monuments in basic firefighting techniques in a bid to reduce fire incidences at the heritage site.
The training came at the backdrop of various destructive fires that have persistently posed a danger to the respected archaeological site.
Veld fires occurred at the monuments for least six times between 1990 and 2015, with two serious incidents being recorded in the 2015/16 fire season.
The group educated the community about the dangers posed by veld fires both to human beings and the environment particularly to the moments as a tourist resort which generates considerable revenue for the country.
Retired seasoned fire fighter, Mark Kutyauripo, who facilitated at the event, said communities needed to be informed and provided with necessary equipment to curb veld fires especially as the country approaches the fire season.
"All communities around the country need basic information and equipment on how to control and minimise veld fires as well as to report fire incidents to relevant authorities since thousands of hectares of veld is destroyed by fire countrywide every year," Kutyauripo said
He also encouraged the participants to conserve their environment by embracing social platforms especially WhatsApp to update each other on incidents of veld fire.
"Embrace this new channel of communication to inform each other when veld fires occur. Fire incidents require communities to be integrated and be able to fight together," he said.
Tawanda Nyabaza, who represented Kondrad Adenauer Stiftung; a German organisation which, among other programmes, is financing efforts to conserve the environment and prevent veld fires; also encouraged people to fight the problems brought about by climate changes.
He said such problems as droughts and low rainfall can be confronted by growing drought-resistant crops, reforestation, and the protection of wetlands.local
Share !