Home » »Unlabelled » Another victim of 2008 political violence dies in Mberengwa

Another victim of 2008 political violence dies in Mberengwa 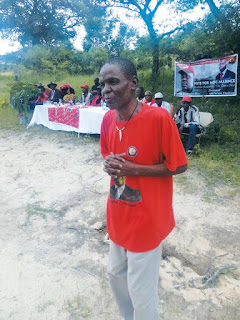 MBERENGWA - The Movement for Democratic Change (MDC-T), Midlands South secretary for defence, Trynos Shava, who died on May 04, has been described as a gallant fighter for freedom.
The 44-year-old Shava passed on after a long battle with an undisclosed illness which many people, however, have said was not unrelated to the injuries he suffered in the run-up to the violent 2008 presidential election runoff as well as in the early 2000s.
Shava rose through the ranks from the youth wing of the opposition party up to the position of Midlands South secretary for defence, a position he held for two consecutive terms until the time of his death.
MDC-T Midlands South spokesperson, Munyaradzi Mutandavari said the party and the wider society had lost a gallant fighter who suffered heavily for the sake of democracy and freedom.
"We have been robbed of one of our gallant fighters, Trynos Shava, from Mberengwa South. He was one of our dedicated sons of the struggle who fought well for the rights of the people and for the achievement of a democratic nation.
"He stood against many of Big Chitoro's atrocities in Mberengwa and suffered heavily for it. He was instrumental in building our structures in parts of Zvishavane and Mberengwa districts," said Mutandavari.
Wilson Kufa 'Biggie' Chitoro, who died in 20014 and was declared a liberation war hero and buried at Midlands Provincial Heroes Acre, masterminded a reign of terror in Mberengwa in the early 2000s, torturing many opposition supporters resulting in the death of the likes of Fainos Kufazvinei Zhou.
In 2008, Chitoro denounced Robert Mugabe for using him to commit acts of terror against opposition members, and regretted having committed many atrocities.
Shava's long-time workmate and colleague, Lewlyn Sibanda described the fallen opposition member as a dedicated and courageous cadre who stood for the principles of freedom.
"Shava was a freedom fighter who was courageous, principled and was a no-retreat-no-surrender type of person and he will always be remembered for that," said Sibanda.
Shava was laid to rest on the May 07 at his family homestead in Mberengwa.
Present at his burial was many people including MDC-T Zvishavane senator Lilian Timveos, national council member Denias Mudzingwa, Midlands provincial secretary general Zenzo Hove, Midlands South spokesperson Munyaradzi Mutandavari, traditional leaders and several community members.politics
Share !