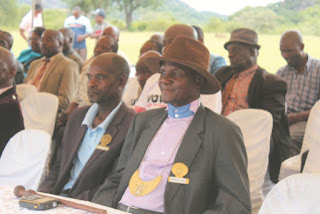 ZAKA – Preparations for the appointment and installations of substantive Chief Bota are being done to avoid a leadership vacuum following the expiry of the permissible period that an area can stay with an acting chief, TellZim News has learnt.
The case is, however, different with the Nyakunhuwa throne which is still being claimed by many royal families with no indication of a possible compromise any time soon.
TellZim News learnt that the Bota royal families had agreed that it was the turn of the Bwazvo family to take the throne.
Zaka District Administrator (DA) Ndeya Nyede confirmed the development saying the long-running feud on who should take over from the late Chiyo Mugabe who died in 2016 had finally been solved and papers will soon be send the provincial chiefs' council.
"The families have agreed that the chieftaincy will go to the Bwazvo family and we will forward our deliberations to the provincial chiefs' council for approval. If everything gets approved, we would then move on to the next stage," said Nyede.
However, the situation is different in Nyakunhuwa, where the DA and the chief's council, chaired by Chief Nemauzhe of Chivi, held a fruitless meeting with the Nyakunhuwa clansmen.
Disagreements were centred on which family should take the chieftainship which was left with no leaders after the death of Jerera Wafawanaka Mashavave in a car accident in 2015.
"We met with the families but we have not resolved anything so far. We have, however, managed to pick up some points which we are going to use in our next meeting. They were disowning each other but it is common when dealing with matters of chieftainships," said Nyede.
Recently, the Mutonhori family which, if papers from the National Archives seen by TellZim News are anything to go by, has never sat on the throne, petitioned the DA over the overstaying of Courage Jerera, who is the acting chief.
The papers indicate the Mashavave family sat on the throne three times, the Mutsvangwa family held it twice while the Murembwa and Mututuvari families took it once each.local
Share !