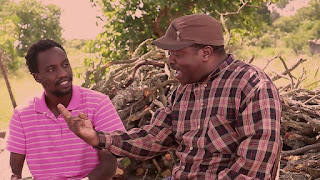 A scene in 'Gehena harina moto'

Hot-on-the-heels of the successful Operation Restore Regasi, Masvingo has yet again produced another artistic piece of art in the form of Don Claude Entertainment's Gehena Harina Moto.
The film stars characters drawn from a pool of talented Zimbabwean actors across the country.
The movie features the likes of Patience Musa, Pah Chihera, Courage Murambadare, Wendy Muwishi, Calvin Summer Severe and Tinashe Musarurwa among other prominent characters from in and out of Masvingo.
Some actors like Alfonso and Flotboi reside in Mutare and just came to Masvingo to play their roles in the film.
Featuring 23 actors, the movie is rich in Shona traditions and its pure language. It depicts what the Shona cultured people face in their day to day lives.
It sends a strong message to people who are in a polygamy bringing to the fore the difficulties they face in life. It is packed with humor and teachings though it leaves the viewer in suspense and eagerness to know what will happen in part 2.
Donovan Takaendesa directed the movie, Millard Katuri produced it with Caroline Magenge and Calvin Severa being production managers.
Masvingo has taken film production by storm with other and has dominated airplay on the national broadcaster ZBC TV with productions like Through the Night, Mayaya nhaka ndeyani, Sabhuku Vharazipi among others.entertainment
Share !