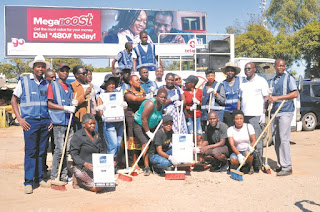 GWERU - Joining hands for one cause, Gweru journalists on Saturday joined the journalism fraternity country-wide in belatedly observing World Press Freedom Day through a clean-up campaign to preach the gospel of media reforms.
May 03 is marked globally as World Press Freedom Day and this year's celebrations were held under the theme 'Keeping power in check: Media justice and the rule of law'.
Media Institute for Southern Africa (MISA) Zimbabwe, Midlands Chapter chairperson, Norman Dhururu said their theme was a reminder that media reforms were important for credible, free and fair elections.
"The theme is a reminder to government on the urgency and importance of implementing the outstanding reforms ahead of elections.
"While we commend the government for signing the African Charter on Democracy, Elections and Governance, they should without further delays adopt and effect its relevant clauses into domestic laws and policies," Dururu said.
Speaking at the same event, MISA national chairperson, Golden Maunganidze said a repressive media environment was not good for anybody.
"We have noted the rising and fierce criticism of the media by political figures. This lead to self-censorship thereby undermining the media's credibility.
"We remain apprehensive about legislation restricting freedom of expression online and offline sweeping across the region under the guise of protecting citizens from cybercrime and reinforcing their rights to privacy while the actual intent is to introduce more stringent monitoring of the internet and control over content posted on social media platforms," Maunganidze said.
"The mistaken impression is that this will affect mainly the media but the impact of this type of control will have a negative effect on all citizens as it will curtail their freedom of speech rights," said Maunganidze.
Local businessman and politician who was guest of honor at the occasion, Trust Chikohora also encouraged the press to spread messages that foster community development in their areas.
"I am happy about how you are particular about your campaign for a free press. We thank you for the clean-up campaign because it shows you are committed to a cleaner city.
"I urge you to use your job to foster development in your communities because the press communicates to huge audiences," Chikohora said.local
Share !