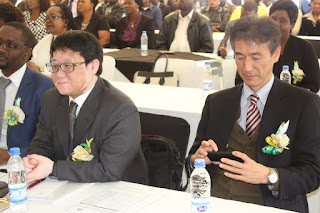 Moses Ziyambi
The Japan International Cooperation Agency (JICA) has made clear its commitment to the growth of tourism in Zimbabwe through its support for a number of projects implemented in partnership with government.
In 2016, JICA trained many people to work at the Chesvingo - Karanga Cultural Village which the agency had just fully refurbished after many years of neglect.
The training – focused on food preparation, basic accounting, tour guiding and marketing – imparted skills needed for the day to day running of the cultural village; a centre for the preservation of traditional cultural practices of the Karanga people.
Elsewhere, JICA is also supporting three similar sites namely Tengenenge Arts and Craft Centre in Mashonaland Central province, Bulawayo Township Tourism and Gairezi Ecotourism in Manicaland province.
The kind of support being given include product development, development of new discovery trails, improvement of facilities and marketing through packaging of tourism products.
The places are now attracting substantial numbers of both domestic and foreign tourists, sustaining many livelihoods as a result.
Last week, JICA was back in Masvingo, this time for the launch of the National Tourism Master Plan, Community Based Tourism Enterprise (CBTE) Manual and Handbook.
The documents, developed by the Ministry of Tourism and Hospitality Industry with close technical cooperation from JICA, will help to further market such places as the Chesvingo - Karanga Cultural Village.
The launch was graced by many dignitaries including Vice President Constantino Chiwenga, who was guest of honour, Tourism and Hospitality Industry minister; Prisca Mupfumira, permanent secretary in the ministry; Dr Sithokozile Chitepo and officials from the African Development Bank (AfDB).
"This technical cooperation project was initiated upon the request of the Government of Zimbabwe for bilateral assistance from the Government of Japan to set up, promote and support CBTEs for the benefit of local livelihoods in Zimbabwe as well as produce a Master Plan.
"This Master Plan was to ensure the sustainable development of the CBTEs and enhance the capacities of tourism related organisations on promotion and development of CBTs.

"The project team from JICA worked in collaboration with the Ministry of Tourism and Hospitality Industry and was housed at the Ministry offices for two years from June 2015 to June 2017," said JICA resident representative, Shumon Yoshiara in his speech at the event.
On his part, VP Chiwenga praised JICA for its critical role in the development of the masterplan, manual and handbook; saying the document was vital for the achievement of set objectives.
"I have no doubt that these important documents will go a long way in attracting both local and international investors and tourists. The launch of these policy documents should not just be just a talk show but should signify a paradigm shift in the way we conduct our tourism business in sync with the country's development mantra, Zimbabwe is Open for Business," said Chiwenga.business