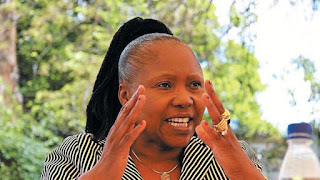 Oppah Muchinguri-Kashiri
Brilliant Mukaro
BIKITA - The Kufandada Irrigation Scheme, located near Nyika growth point, were recently officially opened together with the Bindangombe Irrigation Scheme in Chivi by the Minister of Environment, Water and Climate Oppah Muchinguri-Kashiri.
Kufandada Irrigation Scheme was built courtesy of the Climate Resilient Infrastructure Development Facility (CRIDF) and has got the capacity to irrigate 28 hectares of land sustaining approximately 120 households.
In the case of Bindangombe, the project is benefitting over 1000 people and irrigating 34 hectares with room for expansion depending on water availability.
The two projects will see the beneficiaries shifting from rain-fed agriculture to all-year-round irrigation, allowing for the production of cash crops and horticulture.
Addressing delegates in Bikita, Zimbabwe National Water Authority (Zinwa) chief executive officer (CEO) Dr Jefta Sakupwanya, who stood on behalf of Muchinguri-Kashiri, applauded CRIDF saying the two projects were vital in efforts to reduce food shortages among villagers.
"I have no doubt that the two projects will go a very long way in demonstrating to policy makers how we can mitigate poverty by creating employment and improving food security for the communities.  They will also serve to show the importance of boosting our agro-based economies. Projects like these have a credible potential to transform, for the better, thousands of lives if government mainstreams projects planning and development programmes," said Dr Sakupwanya.
The Kufandada Irrigation Scheme comes with a fish farming project; the fish having been stocked in Rozva Dam which is the source of water for the irrigation.
The fish project came through the Zimbabwe Parks and Wildlife Management Authority (Zimparks) which trained 16 farmers including 5 Agritex extension officers to ensure the sustainability of the project.
Present at the occasion was DFID and UK representative; Alex Harvey, Southern Africa Development Community (Sadc) director of infrastructure; Mapolao Mokoena and Masvingo Provincial Administrator (PA), Fungai Mbetsa.local
Share !