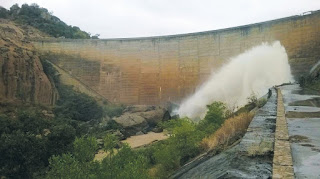 Manyuchi Dam
Cephas Shava
MWENEZI - Villagers from different villages under Chief Mawarire, who are adjacent to Manyuchi Dam, the largest dam in the district, have bemoaned the underutilisation of the water body.
Several villagers told TellZim News that the dam could better be utilised by the establishment of irrigation schemes to fight poverty.
They complained the non-implementation of the long-awaited Pikinini - Jawanda Irrigation Project which was pegged in the early 1990s.
If executed, the projected would benefit several villages under Chief Mawarire and some areas under Chief Murove.
Chairperson of the Pikinini - Jawanda Irrigation Project, Chizivano Shava said the long wait for the execution of the project had wearied many people.
Shava spoke at a constituency development meeting organised by Mwenezi East Member of Parliament (MP) Joosbi Omar where he said it was high time the project was implemented.
"It's only people downstream Manyuchi Dam who are engaging in productive irrigation schemes but those who live adjacent to the dam under Chief Mawarire are not allowed to have personal gardens. The delay in the implementation of the Pikinini-Jawanda Irrigation Project is making the dam less beneficial to villagers," said Shava.
On his part, Omar acknowledged the importance of the irrigation project in efforts that he said are being made to increase agricultural productivity in the area.
He promised to take the matter forward with relevant authorities so that more value could be drawn from the dam.local