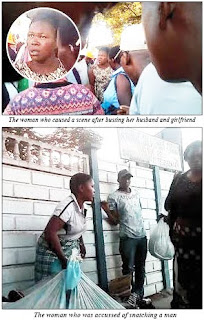 There was drama in Masvingo CBD on Monday afternoon when a man who is said to be a soldier escaped from a street fight involving his wife and another woman suspected to be his girlfriend.
The fight happened on the pavements of Hughes Street, drawing a sizeable crowd of curious onlookers.
Sources said the soldier visited his girlfriend near Central Methodist Church where she sells her wares along the street and gave her a plastic bagful of groceries, sparking a scene after his real wife immediately pounced from nowhere.
"The woman was tipped off and she waited in ambush for her husband to confirm her suspicions," said one eyewitness.
The enraged woman attacked both her husband and his lover but the man quickly slipped off the grip and tried to stop his wife from attacking his girlfriend. He however gave up and escaped as the crowd kept on expanding.
"Chirikundirwadza ndechekuti ndini ndinoita zvese kuti vana vadye, vapfeke vaende kuchikoro iye achiita basa rekuhura zvake," the woman said after the fight was finally broken.
She then confiscated the groceries and tried to seize her love rival's wares but was restrained by other women who warned her it would be a prosecutable offence.
The girlfriend, however, remained defiant saying the other woman had no right to claim the man as hers alone, claiming she had snatched him from another woman as well.
Her spectacles were however broken in the brawl and she sustained minor injuries on her chin.local
Share !