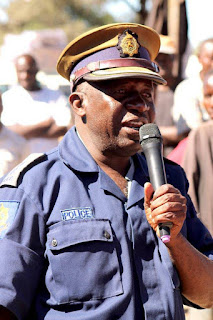 Exsto Makunzva / Caroline Gumbo
ZVISHAVANE - Zimbabwe Republic Police (ZRP) officer commanding Zvishavane-Mberengwa policing district, Chief Superintendent Edward Ncube has challenged police officers to be good at their work, saying society looked up to them for safety and security.
Speaking during the launch of a new Foot Patrol Unit at Mandava Bus Terminus recently, Ncube said police officers should do their duties in a way that inspires confidence in the people they serve.
"Ladies and gentleman, patrolling and doing beats is part of everyday police work. We should not be ashamed of our work. All over the world, police officers do beats and they patrol communities to ensure better observation and greater interaction with the people.
"When taking the oath on appointment, one swears to be faithful and to bear true allegiance to Zimbabwe and observe the laws of Zimbabwe. Therefore, a member who leaves his or her point of duty without permission or reasonable excuse is wayward. He or she is neither faithful, loyal, dependable nor trustworthy," said Ncube.
Members of the police were warned against selecting duties since the very nature of police work demands a lot of discipline, making it impossible for one to be selective.
Ncube said some members of the police despise patrols, considering them to be menial work for the less educated and unsophisticated.
"I get worried when police officers desert their responsibilities when they are supposed to be out protecting the people and fighting crime in communities," said Ncube, urging members of the public to cooperate with the police for a safer society.
He also encouraged the media to promote accountability by exposing police officers who spend their time doing what is not expected of them.local