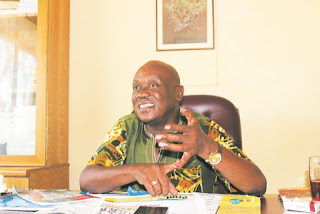 Businessman and losing Zanu PF primary elections candidate for Masvingo Urban parliamentary seat, Edson Zvobgo Jnr owes City of Masvingo hundreds of thousands of dollars in unpaid water bills, TellZim News can reveal.
Zvobgo, who owns Chevron and Flamboyant hotels as well as Panyanda Lodge, has mooted a lawsuit to stop council from disconnecting water to defaulting residents.
Speaking at a Zimbabwe Union of Journalists (Zuj) election reporting workshop at Flamboyant last week, Zvobgo admitted he owed the local authority a lot of money.
He had been asked to respond to criticism that his lawsuit against council was not sincere but was motivated by the desire to forestall any possible disconnection of water to his own businesses due to unpaid bills suspected to be running close to a million dollars.
It was also said the lawsuit was an attempt to curry favour with the electorate, but he went on to lose the primaries to Benjaman Mazarire despite putting up a spirited campaign.
"Yes, I do owe council a lot of money but the motive behind the lawsuit is not at all related to that. I am doing it for the residents, some of whom approached me complaining that council was disconnecting their water and refusing to accept payment of their current bills unless they are able to pay at least 30 percent of their arrears upfront. I am not even endorsing the million dollar figure that I am purported to be owing," said Zvobgo, who however refused to state exactly how much he owed.
City of Masvingo is owed over US$30 million dollars in unpaid utility bills by big business and government departments.
This has seen the city being unable to provide constant water supplies to its residents who themselves complain of council heavy-handedness despite the fact that they owe far less than government and businesses.
"I have assembled a team of lawyers and have identified seven residents who will stands as plaintiffs. We are confident we will win the case. How is it logical that you turn away somebody who wants to pay their current balance of $20 because you want them to pay 30 percent of their debts first? Our position is, better to take the $20 and let people settle their debts in a way they can afford. That $20 you are turning away can make a difference in your coffers. Water is a human right," said Zvobgo.
A City of Masvingo employee, however, dismissed Zvobgo's move as mere politicking.
"It's a public relations stunt. He was doing it for votes and for his own businesses. He owes council lots of money and if he was to pay even half of what he owes right now, many residents would receive water 24 hours a day. So instead of wasting money going to court, he could make better use of that money by settling his debts," said the employee.
Town Clerk, Adolf Gusha said the city preferred dialogue to litigation, adding however that it was everybody's constitutional right to sue public authorities if they felt aggrieved.
"We have said the 30 percent we are asking for can be negotiated, people can make their own so that we find common ground," said Gusha.
On what council was doing to recover the millions owed to it by government, he said debt swaps were being implemented.
"In some instances, we are doing debt swaps whereby we exchange what we owe government in terms of value added tax and payee with what ZRP and other government institutions owe us," said Gusha.politics
Share !