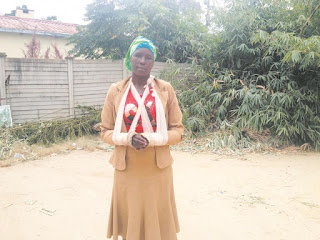 MASHAVA – A local woman whose hands were broken in a road traffic accident in June last year is looking for help from well-wishers so that she can pay medical bills and send her children to school.
Due to the injuries she suffered, Kundai Maganga, who is 35 years of age, is no-longer able to work for her family.
Her hands were broken in an accident involving her scotch cart and a motor vehicle along Mashava - Masvingo Road.
Her husband, Gabriel Dhambukai, also sustained internal injuries and he still suffers from the pain since he could not afford proper medical attention.
"I am appealing to well-wishers who can help me to go for treatment. I have been in plasters since June 2017. The last time I went for a medical review was in December and the X-rays showed the joins were still not in place. I am long overdue for another review but I don't have money to go back.
"I relied on farming but now I cannot work for my family. I can't even bath on my own, feed myself so I rely on my daughter for most of the things I want to do. She was supposed to be in form one now but because of fees, she is at home," said Maganga.
Maganga says she has nine children who include three sets of twins. Her eldest child was supposed to be doing form four and the youngest was born in January.
She said the driver of the car that collided with their scotch cart did not even take responsibility for the accident and has offered nothing. They, however, managed to take him to court and the case is still pending.
Aspiring councillor for Masvingo rural Ward 5, Aleta Makomoke said she was touched by the plight of the family and called upon well-wishers to help.
"More than a thousand dollars are needed. I will do my best and I am calling upon those who can do something to come on board and help," said Makomeke.health
Share !