All Set for Miss Tourism Manicaland 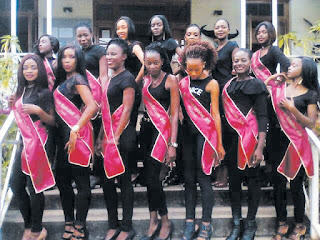 MUTARE - The dice has been cast for the Miss Tourism Manicaland finalists to contest in the finals to be held at a local hotel at the beginning of next month.
The finalists were drawn from all the seven districts of the province, with the auditions having been held twice at the Zimbabwe Tourism Authority (ZTA) offices.
The 14 finalists to battle it out for the top honours include Panashe Zisengwe (20), Chantele Manyande (19), Sophia Simende (19), Sithulisiwe Mvere (24), Talent Sithole (23), Tanatswa Chenga (19), Tafadzwa Jaricha (22), Faith Masoka (20), Life Matunzeni (22), Rufaro Mugomba (25), Rachel Chiitirwa (21), Silethemba Maphosa (23), Natasha Mutandwa (22), Chiedza Makonese (20) and Lisa Mukandi (24) all make up the list.
The 14 finalists were unveiled during the a ceremony that was held at National Art Gallery in Mutare and are scheduled to go for boot camping in the resort town of Nyanga at the end of this month.
Trevor Dongo of the "Ndashamisika" hit song would be the guest artist supported by the duo of Edmos and Enoch Ngarakana using stage name Reel Eez boys.
Also to put icing on the cake in terms of entertainment is Dangamvura-based traditional music ensemble Tswai Tswai dance group and Bulawayo-based songstress Tatenda Marufu.
Miss Tourism Manicaland provincial licence holder, Caroline Marufu Buwu said she expected to go smoothly.
"So far we are happy with the progress we have made. There are quite a number of potential sponsors coming on board. When we first started, we said we were bringing the pageant to the people of Zimbabwe, to the people of Manicaland.
"We want every stakeholder, every individual and company in Manicaland to participate and be part of this pageant which unveils the beauty of Zimbabwe, the beauty of Manicaland.
"We believe we have what it takes and we are optimistic that our models will make it to the national finals. So the 2nd of June is the place to be at Golden Peacock Hotel for the provincial finals," said Buwu.entertainment
Share !