Home » Politics » ‘Beitbridge should be a city’

‘Beitbridge should be a city’ 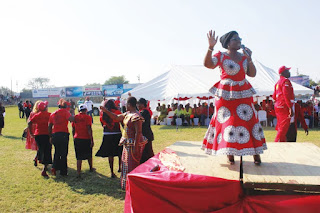 BEITBRIDGE - MDC Alliance leader, Nelson Chamisa last week attacked the Zanu PF government for failing to develop the border town despite the huge potential which comes from its proximity to South Africa and its position as a transit town.
Addressing supporters at his maiden rally in the town at Dulibadzimu Stadium, Chamisa said the town remained underdeveloped despite its strategic place on the country's geo-economic map.
He criticised the delays at the border post, saying there was no good reason for travellers and haulage trucks to spend several hours before being cleared.
"I don't want a month to solve that, just give me a week. If you don't want to work, go home. I am different from (President Emmerson) Mnangagwa who says Zimbabwe is open for business yet they close the border.
"How do you open business when our border is closed? We want a border that makes it easy for those coming from South Africa and going out of Zimbabwe to pass through. This will only be possible through a young leadership not through Ngwena (President Mnangagwa's nickname)," said Chamisa.
Chamisa pledged to establish a home affairs office in Beitbridge, saying the border town should be a business hub with government offices where people will come to look for jobs.
"We want to reverse the immigration trend so that those in South Africa can come back and look for work in a prosperous Beitbridge city with high rise buildings, full municipal status and a thriving tourism sector. This very coming Christmas, nobody will be delayed for any minute longer at the border," Chamisa told the cheering crowd.
He also attacked the government for its failed hotel project whose building has now become a white elephant.
The US$39 million hotel was built by the government-run pension scheme, National Social Security Authority (Nssa) but it shut down in no time due to low business levels.
Speaking at the same event, alliance spokesperson, Prof Welshman Ncube said the opposition coalition was giving Vice President Kembo Mohadi, who has been a constant feature in local politics, a final notice to leave.politics