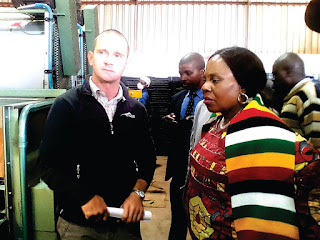 Minister of State for Manicaland Provincial Affairs Monica Mutsvangwa has challenged Chipinge farmers to put much focus on the production of macadamia nuts as they have the potential to bring the much needed foreign currency.
Mutsvangwa said this last week while touring the Enhoek Estate which owns the Buzi Tea Company in Chipinge.
"Chipinge has the potential to bring the much needed foreign currency and this is only possible if farmers put more focus on macadamia nuts production.
"Macadamia nuts has a readily available market and our farmers should capitalise on that," said Mutsvangwa.
Mutsvangwa urged established entities to empower upcoming farmers so that they can grow and realise their own potential.
"I appeal to big companies to sub contract A1 and A2 farmers so that the area has an increase in macadamia nuts production," said Mutsvangwa.
She urged the Chipinge community to desist from stealing from macadamia nuts farmers as there are many reported cases of theft in the macadamia fields.agriculture