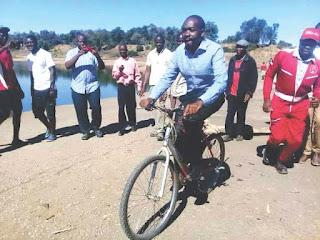 MWENEZI - Thousands of displaced Tokwe Mukosi flood victims who for long have been forgotten by the government had their hope renewed last week after MDC Alliance presidential candidate, Nelson Chamisa visited them at Chingwizi camp.
The Tokwe-Mukosi floods of February 2014 were declared a national disaster by then president Robert Mugabe but he never set foot in the area to see the level of damage.
Mugabe was later removed by the November 15, 2017, military coup which ushered in a 'new dispensation' under President Emmerson Mnangagwa but the old conditions of the flood victims remain unchanged.
The government still owes the flood victims millions of dollars in compensation money and Chamisa last week used the issue to attack Mnangagwa, accusing his administration of neglecting the victims.
Addressing thousands of party supporters at Rutenga growth point last Saturday soon after touring Chingwizi, Chamisa said he witnessed dire poverty and suffering at the camp.
"I went to Chingwizi to see for myself how the people there are surviving. What I saw there was saddening. I came face to face with poverty and I told myself the people of Zimbabwe really need to be saved from the jaws of Zanu PF.
"What I saw exhibited the cruelty of the government and that of my colleague Mnangangwa because he did not even bother to visit the suffering people of Chingwizi but he prioritised to go to Davos and China at the expense of Chingwizi," said Chamisa.
Since their relocation, Chingwizi people have been bitterly complaining over the area's limited access to various key social services health facilities, clean water sources and schools.local
Share !