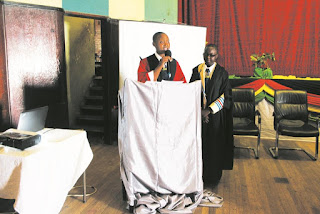 The Junior Council has been revived after a 10-year hiatus; with Jubilant Zulu, Ropafadzo Rutsvara and Anne Mukaka being elected as mayor, deputy mayor and town clerk respectively.
The institution, which dates back to the 1950s, was brought back to life on May 11 at the Civic Centre, with a total of 14 pupils being sworn into different positions.
Speaking at the event, Minister of State for Masvingo Provincial Affairs, Josaya Hungwe said the new junior council should function as a voluntary and political body representing all children under its jurisdiction.
"We expect these young leaders to work with or to partner various clubs and Non-Governmental Organisations (NGOs) that seek to promote children`s rights," Hungwe said.
He said the province was experiencing many cases of violation of children's rights, adding that such vices as child sexual and physical abuse, early marriages, exploitation of orphans and other vulnerable children needed to be fought.
Hungwe challenged the incoming board to take the responsibility of reaching out to all vulnerable and abused children.
"Once you get into office, it becomes your responsibility to look out for these children and help them; be the defenders of children's rights. I also urge you to take part in decision-making processes especially with regards to such issues," Hungwe said.
In her address, Zulu said she aimed to come up with an action plan for 2018-19 which would include creating child-friendly spaces in schools and communities, distributing stationery to less privileged learners and raising awareness on drugs and alcohol abuse.education
Share !