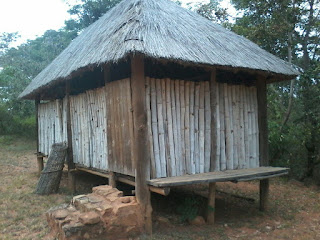 A granary hut at the cultural centre

CHIPINGE – There is an agreement among scholars and all people that culture is a very important component of every society, and that a people's values, customs and language should be preserved, relayed and documented so that posterior generations will know who they are and where they originated.

Cultural preservation is also critical in nurturing fully conscious future generations without an identity crisis. Culture means a whole way of life of any particular nation, organisation, tribe or group of people.

This includes way of dress, art, beliefs, social life, symbols, food and several common aspects that unify a group of people with common characteristics.
Manicaland has several tourist attractions that include the famous Nyanga Mountains, The Devuli Range, the Ngungunyani Forest, Hot Springs and Musirizwi Falls.

Last month, government launched its National Tourism Master Plan as well as a Community Based Tourism Enterprise (CBTE) Manual and Handbook that were developed with the help of the Japan International Cooperation Agency (Jica) to help develop tourism at local level.

For a special feel of Ndau culture, however, one should visit the Paiyapo Arts and Heritage Training Centre in the Bangira area under Chief Musikavanhu in Ward 17.

Founded by Phillip Kusasa Bangira, the place celebrates and explores Ndau culture while offering a platform for the exhibition of different other cultures.

The centre hosts the annual Ndau Festival of the Arts, an event which pulls hundreds of people and many institutions every September.

It is located in a woody thicket to depict a typical African village homestead setup, with different types of thatched huts and grain storage structures.

In the huts are different types of Ndau artistic and cultural artefacts superbly crafted for different purposes.

These include clay pots for traditional beer brewing and storage, other clay pots for cooking and decorative purposes as well as special crafts and home utensils traditionally used by the Ndau people.

There are also different kinds of traditional home property and tools that would form a Ndau home of a traditional make-up.

There is also a setting for a court of elders (dare) as well as a meandering stream of flowing water and traditional Ndau fishing nets.
Water to drink can be fetched at a weir close by while a spacious gallery awaits those who wish to get an appreciation of a wide collection of Ndau artefacts that depict a rich cultural background of local people. These include drawings, sculptures and rock art.

If anything, the gallery can be seen as a collection of tangible evidence of local sophistication which helps to debunk stereotypes about Ndau people and their way of life.

There is also the Women's Museum which is another interesting feature at Paiyapo Arts and Training Centre. The museum honours the importance which Ndau culture attaches to the role of women in society.

Of interest too is a natural Africa map-shaped rock which amazes all visitors to the centre due to its almost accurate depiction of the shape of the continent.
There is also a collection of indigenous plants and herbs, including the rarest of plants that are being preserved from extinction.

In an interview, Bangira said the centre was established as a response to cultural erosion which threatens to leave Ndau people without knowledge of who they are and their place in society.

"We have done this for the sake of the many generations that will come. We want people to be proud of their heritage and their past. The Ndau language is a good language that defines our identity as a people. We invite people from all over the country to come and see the work we are doing here," said Bangira.

He said he was pleased that the centre had helped improve business activities in the Bangira area through a steady flow of tourists.

He also said he was working hard to increase the popularity of the Ndau Festival of the Arts so that more people can appreciate their identity.
The festival has so far proved to be the district's most innovative way of celebrating local culture through exhibitions, poetry, dance, exchanges and other activities.business