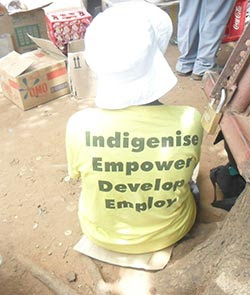 BIKITA - While leaders of the MDC Alliance are pressing for implementation of outstanding electoral reforms to ensure free, fair and credible elections, some opposition coalition's members in Bikita are alleged to have beaten up two Zanu PF supporters for wearing their party regalia.
James Musukutwa is said to be battling for his life at Silveira Mission Hospital, while Daniel Museve was treated and discharged following the attack by alleged MDC-T supporters.
The two victims are from Chirorwe village, Ward 20 in Bikita East constituency.
Zanu PF national assembly candidate for Bikita East, Johnson Madhuku had to assist the injured Musukutwa and Museve by providing transport to ferry them to the hospital as well as paying the medical bills including x-rays.
In an interview with TellZim News on Wednesday, Madhuku confirmed the development saying Musukutwa was still admitted at Silveira Hospital.
"Museve was wearing a party T-shirt when he was approached by some MDC-T members who then confronted him demanding to know why he was moving around wearing Zanu PF regalia. They beat him up and James Musukutwa was also beaten up when he tried to rescue Museve.
"I want to encourage the people of Bikita East to exercise tolerance; we may belong to different political parties but we are all Zimbabweans.
"Our President ED Mnangangwa is preaching peace so that we can have peaceful free, fair and credible elections," said Madhuku.
Musukutwa reportedly almost lost a finger and was still admitted at Silveira Hospital by the time of writing.
Zanu PF Masvingo provincial chairperson, Ezra Chadzamira also confirmed the case and slammed the use of violence by the opposition, which is always demanding free and fair polls.
"MDC-T leader is always on record denouncing violence; we therefore encourage opposition members to be tolerant. They are demanding free and fair elections but how can we achieve that when I am receiving reports that they have assaulted our supporters in Bikita East?" Chadzamira said.
Two months ago, MDC-T senior official Takanayi Mureyi told party supporters during a rally at Nyika growth point that his party was ready to unleash violence against Zanu PF if provoked.
Mureyi said if Zanu PF was to ever beat up any MDC-T supporter, they would attack 10 in revenge.
His statements, however, were watered down by party leader, Nelson Chamisa who said the MDC-T was a peaceful party which does not support the beating up of political rival.
"We are not a violent party; we must exercise tolerance. We want peace so that we can have free and fair elections," said Chamisa then.
Addressing MDC Alliance rally in Chiredzi last Sunday, Chamisa again emphasised the need to shun violence, saying his party would not hesitate to expel any members found wanting.
"We are a democratic party and we do not tolerate violence. We do not want to be associated with violent people in our midst. If anyone perpetrates violence, give us their names and we will expel them from the party," said Chamisa.
Bikita is one of the districts that have experienced the most horrific, politically-motivated violence since year 2000, much of which was, however, perpetrated against opposition supporters allegedly by Zanu PF activists.top news