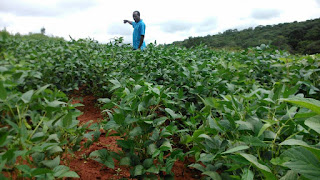 Majazo in his soya bean field

CHIPINGE - Having graduated from the Midlands State University (MSU) in 2017 with an honours degree in Politics and Public Management and after a long fruitless search for a formal job, a youth who had never thought of farming as an option has now invested all his hope in the land.

Respect Mlambo Majazo (25) from Mukoteni village in Ward 17 under Chief Musikavanhu, has started a farming project that is employing many other young people of Chikore communal lands.

Majazo is making some good use of his father, Pearson Mlambo Majazo's seven-hectare piece of land near Nyaudongo River by planting such crops as maize, sweet potatoes, tomatoes, soya beans, sugar beans and other vegetables.

He has built a small dam from which he draws irrigation water through canals he has dug and pipes he has laid down with his own hands.

The project has recorded some considerable levels of success, employing some local youths who previously had no means to productively spend their time.

Majazo told TellZim News that the farming project had given him hope that he could turn around his life without necessarily looking for employment elsewhere.
"I have realised that I can make a living through farming instead of complaining over unemployment in the country. So many organisations and companies have closed down and people are not being hired on merit alone but mainly on the basis of who you know.

"I have found hope in agriculture and I encourage others to do the same. Besides, there are so many other ways of employing ourselves in such sectors as fisheries, carpentry, mining and construction.
"We should adopt a new way of thinking as the youth. There is no room for laziness when you know that the economic environment is tough. After all, there is so much more in working for yourself than finding employment at other people's places," said Majazo.

His venture has enabled him to build a modesty six-bedroomed house within a short period of time and he is able to take good care of his family, pay employees and buy inputs.

Majazo's father, Pearson, said the project had improved living conditions in the family, with more food now available to the family.

"My son is doing well. His project has brought food security to our home and he is also earning money through selling some of his produce to households, schools and shop owners and his future in farming seems bright as he has started very well," the elder Majazo said.

One of the youths working at the project, Johanne Gwabuya said he was grateful that the project had given him a chance to earn a better living.

"Our lives have been greatly transformed ever since we started working here. We used to go for days without a single cent in our pockets but now the situation is totally different. All thanks to our boss," said Gwabuya.

The project in mainly labour intensive since it has not yet raised enough capital to buy machinery and expand operations.

Majazo said his vision is to grow the venture so that he can employ more people and be able to supply the whole of Chipinge district and beyond.business