Karate athletes off to Botswana 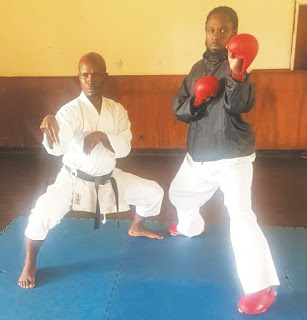 MASVINGO – The Zimbawe Karate Union (ZKU) has taken 28 Zimbabwean karate athletes to the two-day Region 5 Karate Championship which kick-starts on Friday, June 01 in Botswana.
The athletes are of different age groups; from children in the 10-11 year age range to the seniors of around 24 years of age. Seven are females and the team also has eight officials who are non-athletes.
The team's technical director, Gerald Muusha said his team was going for glory and was hoping to bring back many medals.
"I can promise that we will pose a strong challenge to whoever we will meet in Botswana and we will bring back gold medals and raise the Zimbabwean flag high," said Muusha.
He revealed that the union was facing financial challenges since the corporate world was failing to come in to support them.
This, he said, was forcing athletes to dig into their own shallow pockets to travel to such events. He however thanked AfricaBet which he said was doing a lot to support them.
"Our biggest challenge has always been lack of financial support from the corporate world. Yes, we have AfricaBet which has supported the team over the years but the load is too big for one organisation. Many thanks to AfricaBet and the media for the support," said Muusha.
The athletes were selected across the country after making it from their respective provinces.sport
Share !