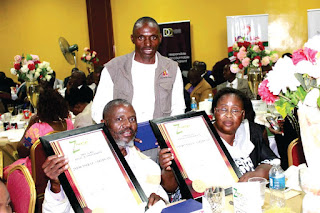 Buhera RDC staff hold their prizes at the award ceremony

MUTARE - Zimbabwe National Chamber of Commerce (ZNCC), held its Manicaland Business Awards and dinner on June 01, with a number local authorities being nominated for doing well in the year 2017.
The awards, which are held annually, saw new names and faces making it onto the list which included the usual winners; Tongaat Hulett and Mega Market.
Buhera, Mutasa and Makoni rural district councils (RDCs) were named best local authorities for the year 2017.
Buhera RDC was recognised for notable improvement of service delivery since 2014, a development which has seen Murambinda growth point reviving hopes of moving towards town status.
The RDC was also praised for improving the ease of doing business, with a notable increase of investment at the growth point.
Buhera RDC CEO, Emily Chibvongodze, said the local authority was planning to build a new town near Murambinda B Primary School and to upgrade the road to Birchnough.
"We are looking forward to work on the road which links us to Birchenough. The road is very bad and it has for all this long separated us from important markets. Even our offices were supposed to be at Birchnough," said Chibvongodze.
Isaiah Musabayana of Eat n Lick scooped the ZNCC Businessman of the Year 2017 Award while Rachel Mgwagwa (Wimpy Mutare) was named Business Woman of the Year 2017.
Other winners were Zimbabwe Consolidated Diamond Company (ZCDC) CEO Morris Mpofu, Nyaradzo Group, OK Zimbabwe, Diamond FM, Holiday Inn and TelOne.local