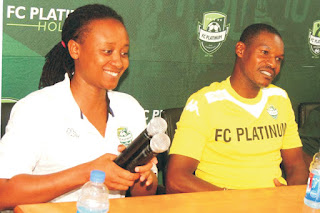 ZVISHAVANE - FC Platinum coach, Norman Mapeza challenged players and supporters of football that they should not expect only strikers to score goals, saying it was the responsibility of every player on the field of play.
Speaking to the media during a press conference on Tuesday, Mapeza said any player, especially starting from the midfield, should be hungry for goals.
"I have often heard people saying we don't have strikers in the country. If we put that burden to the strikers only, then we are removing the other players from the equation. I believe for a team to be compact, everyone from the midfield to the front should contribute," said Mapeza.
The 'Pure Platinum Play' gaffer praised his boys for a splendid performance against Dynamos in which they beat the Harare giants by two goals to nil.
Mapeza said he was humbled by the way his boys played in Harare.
"I am happy with my boys' for such a performance. It's not easy to collect maximum points away from home especially against such a big team as Dynamos. We, however, are now focusing on the match against Nichrut on Thursday.
"I have respect for every coach in the premiership. There is no small team in the league. John Nyikadzino (Nichrut coach) has done very well in the league, he has collected 13 points so far which is not bad for a team that is just joining the league. Given that fact, we can underrate Nichrut at our own peril," said Mapeza.
The FC Platinum coach also said there was no much injury scare in his camp except for Rodwell Chinyengetere who suffered a relatively slight injury during the Dynamos game.
Mapeza, however, said Chinyengetere did light training on Tuesday and will be finally assessed on Wednesday for the Nichrut game.
Mapeza also urged his boys to score as many goals as possible during this first half of the season as he predicted a very difficult second half of the season.sport
Share !