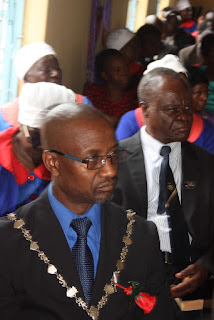 City of Masvingo mayor, Hubert Fidze and his deputy, James Chiwara are the only two of MDC-T's six sitting councillors in Masvingo Urban who will not be contesting in the general elections after they lost to rivals in primaries held at the party's provincial headquarters in Rodene on Wednesday, May 23.
Fidze, who is the current councillor for Ward 6, lost to David Chimombe by 146 votes to 55, while Chiwara of Ward 3, gave way to Tarusenga Vhembo by way of 'consensus'.
When contacted for comment, Fidze criticised the way the elections were held, saying many people were bussed to vote against him.
"It was not a fair process because people were bussed in. The venue of the election was also not friendly; it's far away from the ward so some of my supporters could not come and vote," said Fidze.
MDC-T Masvingo district chairperson, Muranganwa Chanyau, however, defended the conduct of the elections, saying everything was done smoothly.
"Elections were held for some wards while consensus was used to determine candidates for the other wards. We are happy with the process," said Chanyau.
Meanwhile, the party's parliamentary candidate will be Takanayi Mureyi after his strongest rival, Tongai Matutu was rejected reportedly on the basis that he had not yet spent the mandatory five years with the party.
Until recently, Matutu, had been a member of the Tendai Biti-led People's Democratic Party (PDP). Mureyi's other rival, Boniface Mazarire was kicked out of the race on the basis of 'seniority'.
The final list of MDC-T Masvingo Urban council candidates was given as follows.
Ward 1 Selina Maridza, Ward 2 Collen Maboke, Ward 3 Vhembo, Ward 4 Godfrey Kurauone, Ward 5 Daniel Mberikunashe, Ward 6 Chimombe, Ward 7 Richard Musekiwa, Ward 8 Martin Mureri, Ward 9 Babylon Beta, Ward 10 Margert Chakabuda.local
Share !