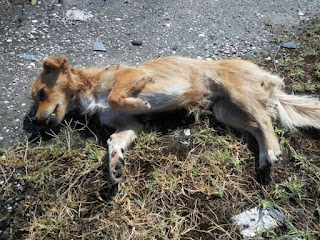 MWENEZI - A 68-year old Mwenezi village who allegedly poisoned many dogs and chickens as way of revenge for his goat which had been mauled to death by some dogs was last week brought before the courts.
Earlier this year, TellZim News reported on a shocking incident where many village dogs and chickens had died after eating poisoned food thrown around at several homesteads during the night.
Fani Chikahamare of Village 5, Munyamani under Chief Maranda, was being represented by his lawyer Kossam Chuma when he appeared before magistrate Honest Musiiwa.
He pleaded not guilty to 14 counts that were read before him but villagers who lost their dogs and chickens in the barbaric incident, however, said it was indeed Chikahamare who committed the offence.
They argued that he cut some pieces of flesh off the carcass of his goat, applied some poison onto them and moved from door to door in the night, feeding all the dogs.
The complainants said they woke up the following morning to the horrible site of dead dogs, cats and chickens that had also consumed bits of the poisoned meat.
Charles Sibanda, who is one of the complainants, told the court that one of the key witnesses who saw Chikahamare committing the dastardly offence had since developed some mental challenges after exposing the act.
"The key witness in this case is my younger brother Hardlife Sibanda. When Chikahamare realised that he was spotted by Hardlife committing the offence, he warned him against exposing him. However, the day Hardlife broke his silence, he became mentally challenged and is now admitted at Ngomahuru Psychiatric Hospital," Sibanda said.
Led by prosecutor Willard Chasi, the State alleged that on January 17, Chikahamare's goat was mauled by some dogs from the village and he vowed to retaliate.
On the night of the same day, Chikahamare laced remains of the dead goat with an unknown poisonous substance and moved around the village throwing the poisoned meat at several villagers' homesteads.
Villagers woke up the following morning to find dogs, cats and chickens dead. Footprints of the suspect were tracked and they led to Chikahamare's homestead.
According to State papers, more than 60 dogs, some cats and several chickens belonging to different villagers died. The matter was postponed to a later date for continuation of trial.news
Share !