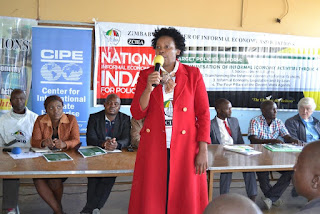 ZCIEA President,Lorraine Sibanda, addresses vendors on the importance of engaging the political candidates(seated behind her) on informal sector development

Shingirai Hwande
The Zimbabwe Chamber of Informal Economy Association (ZCIEA) in partnership with the Centre for International Private Enterprise (CIPE) hosted a town hall meeting on 13 June 2018 where informal traders ,who included are large community of people with disabilities (PWD), interacted with aspiring candidates for the 2018 harmonised elections at Mucheke Hall in Masvingo.
The town hall meeting was attended by local vendors, cross border traders, aspiring candidates and other interested parties. The informal workers had the opportunity to ask questions after each aspiring candidate presented his/her manifesto, a blue print which outlines the party's policy and procedure in tackling certain issues.
During the Masvingo townhall one of the vendors asked People's Rainbow Coalition (PRC) aspiring councillor for Ward 2, Kamurai Mutendi:
"Why do elected councillors implement policies without the consulting residents and vendors?"
In response, Mutendi assured the audience that his party will involve vendors in implementing policies that affect their (vendors) livelihoods.  Although Mutendi promised to give free education and free medical services to people with disabilities once elected, they still expressed their concerns and complaints in relation to the way they (PWDs) were being treated in the informal sector.
"Disabled people in the informal sector are always abused and stigmatised, hence their contribution to the economy is undermined,' stated one of the PWD participants.
The people with disabilities thanked ZCIEA for organising such a forum which gave them a voice to speak against stigmatisation and for their concerns to be heard by the aspiring councillors and parliamentarians as people contributing to the economy through informal trading.
ZCIEA and CIPE are centred on promoting better and sustainable livelihoods for less privileged people who economically strive to make a living. ZCIEA was established in 2002 and it seeks to lobby and advocate for issues affecting informal traders.  CIPE is based in Washington DC, United States of America and it also works with partners to find locally driven solutions to problems that affect the lives of millions of people.ZCIEA hopes to hold these political candidates accountable to the promises they made during the townhall. Speaking during the event, ZCIEA President Lorraine Sibanda said,
"it is important that we meet with the candidates and know what they are willing to do for us. We need to know what measures they will put in place when they are in power and we, as an organization will be there to see that they fulfill the promises that they made today."
The Masvingo townhall was the first of the five townhalls to be held by ZCIEA across Zimbabwe this June.local
Share !