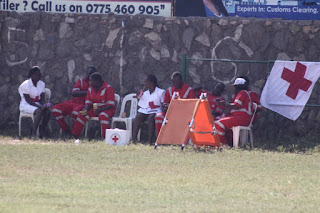 Zimbabwe Red Cross personnel were in Dulibadzimu Stadium before, during and after the rally

BEITBRIDGE - The Zimbabwe Red Cross Society has been praised for its apolitical commitment to the welfare of citizens as demonstrated by the presence of its personnel and equipment at the MDC Alliance rally in Beitbridge last week.
In a country where State resources are deployed only at government and Zanu PF functions, it was refreshing that the civil society was stepping forward to fill the gap, MDC Alliance leader, Nelson Chamisa said.
He was reacting to the presence of the Red Cross at the stadium before and during the rally which was attended by thousands of cheering supporters.
"Many have described this as political maturity within ourselves as Zimbabweans. Let not politics divide us, it is only our perception and thinking that may differ but we are one.
"We are moving towards change, where medical practitioners value their duties regardless of the nature of event; be it Zanu PF or MDC programmes. Medical practitioners should be everywhere even at tollgates" Chamisa said.
Speaking at the same occasion MDC-T woman chairperson Lynnette Karenyi said if all organisations in Zimbabwe could learn from Red Cross, the country would be a better place.
One Beitbridge resident who spoke to TellZim News said emergency health and ambulance services were critical at big public events.
"All these people you see have different medical needs; some have high blood pressure and some are diabetic and may need urgent attention at any time. Such services as first aid are of paramount importance at events like this," said the resident.
Share !