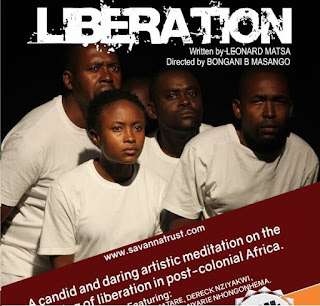 We are excited to have the play bouncing back in 2018 – after a good run since its premiere in 2016 Besides performing in the standard theatre spaces Like Charles Austin, we will also stage performance at Mucheke hall because we believe that there are some who cannot make it to the theatres but really want to watch the play and to enlarge the play's audience base and also spread the message of how Africa needs cleansing, re-imaging, new heroes and new action. Another key aspect is to give the play a longer lifespan.

We have realised that in Zimbabwe many productions have a very short lifespan and yet in other countries plays exist for a longer period.". Last year, Liberation was performed at the Sadc People's Summit in South Africa and after Masvingo performances the team will proceed back to South Africa for another run in Grahams town, South Africa, with the play this time for the National Arts Festival The production is an hour long and it was written by the renowned writer Leonard matsa and directed a South African based director: Bongani Masango Cast: Dereck Nziyakwi, Rumbidzai Hungwe, Francis Nyakuhwa, Nyaradzo Nhongonhema and Daniel Maposa.entertainment
Share !