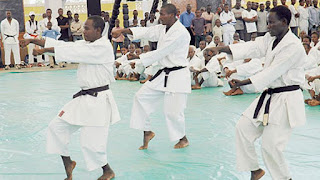 ZAKA – Two months ago, Masvingo province made headlines as machete wielding rapists (mabhinya) terrorised women with female teachers at rural schools caught in the cross fire and in response, schools in Zaka district were last week forced to pay a US$80 fee to fund a three-day defensive (karate) training workshop for female teachers, TellZim News has learnt.
The workshop which invited two teachers per school was aimed at empowering female teachers between the age of 18 and 50 to defend themselves against 'mabhinya'.
The workshop was facilitated by karate instructors from Kyokushin Karate International Honbu.
In a letter from the District Schools Inspector (DSI)'s office to the school heads, the schools were asked to deposit the money into the Better Schools Program Zimbabwe (BSPZ) account and all schools were asked to participate.
"This serves to notify you of a training workshop on 'mabhinya' where two female teachers from each school will be recommended to participate.
"The workshop fee is $40 per participant and it covers food for three days and certificates. Please support them by giving them transport to and from the venue. Deposit the money in the BSPZ account as usual and since this is a short notice, allow your teachers to attend as you pay the fee. All schools are expected to participate," reads part of the massage.
The training workshop was conducted at the Zaka district education offices and all the 136 schools in Zaka were forced to comply.
However, school heads who spoke to this publication said there was no logic in the program as only two teachers were trained and other schools failed to comply.
"We were forced to fund the workshop which benefits only two individuals at the school and besides, how can a two-day workshop equip a woman against armed robbers?" said one head.
Zaka DSI Beaular Shambambeva was not available for comment as her mobile phone went unanswered but it has been established that the District Office was acting on instructions from the provincial office.
Provincial Education Director (PED) Zedius Chitiga is reported to be out of office and his mobile phone is not reachable.
However other heads said the workshop was fruitful though the time was short and asked for the organisers to do it at cluster level so that it includes a number of teachers.
"Considering the fact that Zaka was affected by cases of these bandits, I think the workshop was a good idea but it has to be done for quite a longer period so that those trained could be fully equipped to teach others and the pupils," said another head.local
Share !