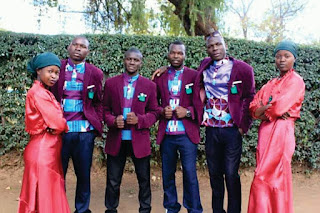 Makumbe Brothers, a musical ensemble with the Bishop Nehemiah Mutendi-led Zion Christian Church (ZCC) has released an album which features popular gospel artist Blessing Shumba.
The album titled 'Formula yedenga', comprises six songs namely Formula yaMwari; on which Shumba is featured, Ityai Mwari, Kumakomo, Psalms, Season and Vamukiri.
Makumbe Brothers leader, Noel Makumbe said he was happy that the project they had worked on for a very long time had finally succeeded.
"We want to spread the gospel through music. This is our third album and we are humbled that we have Blessing Shumba, a respected guru in the gospel industry, on it. This has helped us to further showcase our talent and we hope our fans will enjoy the music," said Noel.
Noel's twin brother, Tryford, said they once worked under Lucky Chikuwa and the ZCC Mbungo Stars band but later on decided to do their own work.
"We were groomed by Lucky Chikuwa and later decided to go in our own way and now our group is growing with people appreciating our work," said Tryford.
The group has two more albums namely Zvinoreveiko and Chinyakare.
When contacted for comment, Shumba pointed out that he was happy to be able to help develop young talent and develop careers, adding that the Makumbe Brothers were very talented.
He also said he was ready to help all those who wanted him to feature on their music albums.
"The Makumbe Brothers are talented and I am happy to be featured on their piece of art. I am ready to work with anyone to help spread the word of God through music," said Shumba.entertainment
Share !