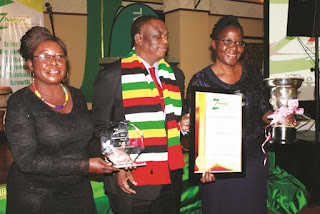 VICTORIA FALLS - The Zimbabwe National Chamber of Commerce (ZNCC) held its 2018 annual general meeting (AGM) in the resort town where several awards in such categories as resilience and competiveness were won.
Many people won awards in their individual capacities, with Mother Touch group of schools proprietor, Salom Mutsinze walking away with the Businesswoman of the Year 2017 title while FMC director, Rangarirai Mavhunga was named Businessman of the Year 2017.
Such companies as Old Mutual, Zimbabwe Consolidated Diamond Company (ZCDC), Zimbabwe Manpower Development Fund (Zimdef) and, Econet, TelOne, DHL, Agribank and Liquid Telecoms were also honoured for doing well in 2017.
TelOne, Liquid Telecom and Econet received awards for best network and data providers while Africa University (AU) was named best university for its solid reputation which has attracted students from many African countries.
Guest of honour at the occasion was Vice President Constantine Chiwenga who praised ZNCC and its members for having faith in the country despite the volatile economic conditions.
"Despite the challenges in our operating environment, it is still possible to succeed. I encourage you to continue with this entrepreneurial spirit and for those businesses that did not receive any award today, we still recognise and appreciate your efforts," Chiwenga said.
Meanwhile, Tamuka Macheka who had been ZNCC vice president, was named new president, taking over from Divine Ndhlukula who has stepped down after serving for a single term.
Macheka is a renowned hotelier who once served as the Hospitality Association of Zimbabwe (HAZ) vice president. Oswell Marange, who runs a transport business in the resort town, is the new ZNCC vice president.local
Share !