‘Do not test us this time’ 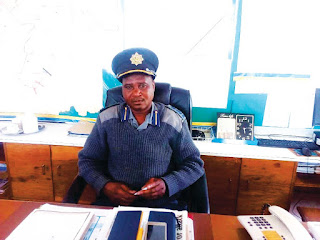 The Zimbabwe Republic Police (ZRP) has promised to deal decisively with anybody who engages in political violence at any time before, during and after the harmonised elections scheduled for July 30.
Officer Commanding Police Masvingo Province, Assistant Commissioner Coneli Dube on Monday told TellZim News in an interview that the law would be applied strictly against those who provoke violence regardless of their political affiliations.
"We will not accept political violence from whatever quarter. The police are there to enforce the law and ensure that there is peace, in line with the new dispensation's commitment to a free, fair and credible election. Nobody will be allowed to breach the peace we have now.
"If you commit acts of violence or anything that disturbs public law and order for political reasons, we will arrest you. We would not even ask you the name of your political party, we would simply spell out the charges to you," said Ass Com Dube.
He said the police were working hard to maintain the current peaceful environment as the country draws even closer to the elections.
"We are happy with the peace and order that we are enjoying, and we are even grateful for it. Ours is a duty to work with all stakeholders including members of the public to create a safe environment where people go about their business without hindrance. Elections come and go, but the people will always remain so you don't want to be caught on the wrong side of the law for things that come and pass," he warned.
Ass Com Dube also encouraged those who want to address large gatherings to notify the police in accordance with the requirements of the Public Order and Security Act (Posa).
"It's not like we want people to tell us of their planned activities so that we can ban them, no. The idea behind notifying the police is to make sure there is security. Remember there are provocateurs who may deliberately try to interfere with your activities by organising their own event at the same venue, on the same date and at the same time," As Com Dube said.top news
Share !