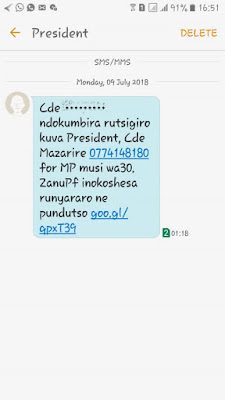 Thousands of rural dwellers in Masvingo province are worried after they received text messages asking them to vote for President Emmerson Mnangagwa as well as respective Zanu PF parliamentary candidates.
The message, that were received beginning on Monday and are reportedly coming from Mnangagwa himself, has struck fear in many villagers who think the President and his ruling Zanu PF party knows everything about them.
Even some aspiring Zanu PF MPs from Masvingo who declined to named for fear of victimisation said they were equally worried with the latest development.
The aspiring MPs said they were busy doing some fire-fighting since their mobile numbers were also made public 'by someone up there' without their consent.
As a result – the MPs complained – some 'rogue' elements in their constituencies now have their numbers which they are now using to send 'all sorts of insults and abusive messages' to counter the 'President's' unsolicited messages.
"It's something that was rushed and implemented without even our knowledge and consent. I also received the same message in the morning and the next thing I am getting a chain of messages from my political opponents insulting me. Imagine even after the elections, over 25 000 people in my constituency now have access to my mobile number and they will be harassing me all the way," said Zanu PF aspiring candidate in Masvingo province.
However, Zanu PF provincial chairman Ezra Chadzamira downplayed the issue saying there was no harm in people receiving 'just a text message from the President'. He even said instead of crying foul, the people of Zimbabwe should be happy to have a rare opportunity to have a direct communication from Mnangagwa.
"I don't see what the fuss is all about. Why would people get mad at Zanu PF for sending them text messages? How often does one get a message from the President? People should be grateful and not just throw stones. How many people have your number from which I can get them from?
"We did our research and we got the numbers. Opposition members are crying the loudest but what harm does a text message cause. Just ignore it and move on," said Chadzamira.
However, members the public who once surrendered their voter slip serial numbers to Zanu PF during the voter registration period said they were worried with Zanu PF's maneuvres since they do not know the amount of their personal data stored at Zanu PF offices.
"My mother in Masvingo rural phoned me informing me about that development. She was extremely worried and she wanted assurance from me that Zanu PF did not have mechanisms to see who she will vote for," said another informant who spoke to this publication.
Another resident in Masvingo, Thomas Mbetu castigated Zanu PF for sending him the unsolicited message.
"I was shocked to receive that message from Mnangagwa. I am extremely worried because I did not give anyone my numbers except the Zimbabwe Election Commission (ZEC) and now it shows my privacy has been invaded and I am not sure what's next," said Mbetu.
Another resident from Mashava, Davison Mugodzwa said Zanu PF was fooling itself thinking that people still likes it.
"We don't want such messages in our phones, they (Zanu PF) stole our data and they are now using it against us. That will not even change my thinking but it will instead consolidate my belief that Zanu PF is full of thieves," said Mugodzwa.
When contacted for a comment on Tuesday afternoon, ZEC Masvingo Chief Elections Officer, Zex Pudurai said he was not aware of the development.
He said it was impossible for his organisation to give political parties the people's contact numbers before referring all questions to the ZEC head office in Harare.
ZEC chairperson, Priscilla Chigumba told a press conference in Harare earlier this week that her organisation was not in any way involved in releasing voters' data to Zanu PF.
"I urge all members of the public to contact either NetOne or Econet to stop sending you those messages in the same way you opt out from receiving telemarketing adverts.
"We will however investigate the source of the information and where there is any leak of information we will take appropriate measures," said Chigumba while addressing a press conference.politics
Share !