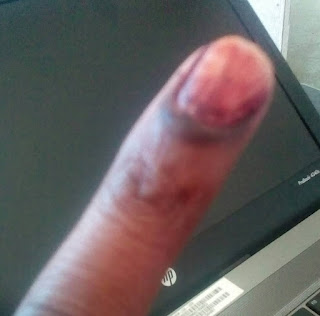 TellZim Reporter
There are reports from many polling stations in Masvingo province that some women are 'lending' babies to each other or hiring them for a small fee so that they can be allowed to jump slow-moving queues.
There is a provision allowing nursing mothers be given preferential treatment at polling stations such that they are not required to join the ordinary queues.
TellZim News has, however, gathered that this facility is being abused by some women who are allegedly 'hiring' their friends, relatives and even strangers' babies for this purpose alone.
There was pandemonium at Shakashe Primary School polling station AB this morning when a woman was asked to go out and join the slow-moving ordinary queue following suspicions that she had hired a baby. The baby had cried uncontrollably but the woman failed to calm him down and give him suckle.
At Sally Mugabe Preschool, Gutu Central Ward 34, there were loud complaints from agitated voters who alleged babies were changing hands.
Similar reports were received from Ward 4 Masvingo Urban and Jerera growth point, Zaka Central, where hiring a baby was said to be costing US$5.
At Dikwindi Primary School, Ward 6, a well-known kombi driver faked blindness so that he could be allowed to jump the queue. He was busted by other voters who shouted him away as he was about to get into the polling station.local